Stephen Hawking (1942-2018) was an English theoretical physicist whose theory of exploding black holes drew upon both relativity theory and quantum mechanics. He also worked with space-time singularities.

Hawking studied physics at University College, Oxford (B.A., 1962), and Trinity Hall, Cambridge (Ph.D., 1966). He was elected a research fellow at Gonville and Caius College at Cambridge. In the early 1960s Hawking contracted amyotrophic lateral sclerosis, an incurable degenerative neuromuscular disease. He continued to work despite the disease’s progressively disabling effects.

Hawking worked primarily in the field of general relativity and particularly on the physics of black holes. In 1971 he suggested the formation, following the big bang, of numerous objects containing as much as one billion tons of mass but occupying only the space of a proton. These objects, called mini black holes, are unique in that their immense mass and gravity require that they be ruled by the laws of relativity, while their minute size requires that the laws of quantum mechanics apply to them also. In 1974 Hawking proposed that, in accordance with the predictions of quantum theory, black holes emit subatomic particles until they exhaust their energy and finally explode. Hawking’s work greatly spurred efforts to theoretically delineate the properties of black holes, objects about which it was previously thought that nothing could be known. His work was also important because it showed these properties’ relationship to the laws of classical thermodynamics and quantum mechanics.

Hawking’s contributions to physics earned him many exceptional honors. In 1974 the Royal Society elected him one of its youngest fellows. He became professor of gravitational physics at Cambridge in 1977, and in 1979 he was appointed to Cambridge’s Lucasian professorship of mathematics, a post once held by Isaac Newton. Hawking was made a Commander of the British Empire (CBE) in 1982 and a Companion of Honour in 1989. He also received the Copley Medal from the Royal Society in 2006 and the U.S. Presidential Medal of Freedom in 2009. In 2008 he accepted a visiting research chair at the Perimeter Institute for Theoretical Physics in Waterloo, Ontario, Canada.

Previous publications include The Large Scale Structure of Space-Time (1973; coauthored with G.F.R. Ellis), Superspace and Supergravity (1981), The Very Early Universe (1983), and the best sellers A Brief History of Time: From the Big Bang to Black Holes (1988), The Universe in a Nutshell (2001), A Briefer History of Time (2005), and The Grand Design (2010; coauthored with Leonard Mlodinow).

BRIEF ANSWERS TO THE BIG QUESTIONS

The world-famous cosmologist and author of A Brief History of Time leaves us with his final thoughts on the biggest questions facing humankind.

Stephen Hawking was the most renowned scientist since Einstein, known both for his groundbreaking work in physics and cosmology and for his mischievous sense of humor. He educated millions of readers about the origins of the universe and the nature of black holes, and inspired millions more by defying a terrifying early prognosis of ALS, which originally gave him only two years to live. In later life he could communicate only by using a few facial muscles, but he continued to advance his field and serve as a revered voice on social and humanitarian issues.

Hawking not only unraveled some of the universe’s greatest mysteries but also believed science plays a critical role in fixing problems here on Earth. Now, as we face immense challenges on our planet—including climate change, the threat of nuclear war, and the development of artificial intelligence—he turns his attention to the most urgent issues facing us.

Will humanity survive? Should we colonize space? Does God exist? ​​These are just a few of the questions Hawking addresses in this wide-ranging, passionately argued final book from one of the greatest minds in history.

Featuring a foreword by Eddie Redmayne, who won an Oscar playing Stephen Hawking, an introduction by Nobel Laureate Kip Thorne, and an afterword from Hawking’s daughter, Lucy, Brief Answers to the Big Questions is a brilliant last message to the world. 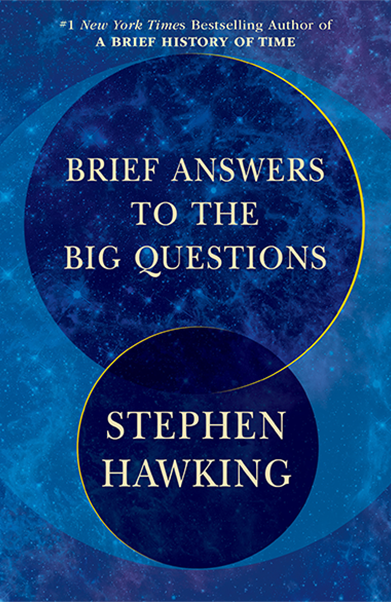